Learning from A Student 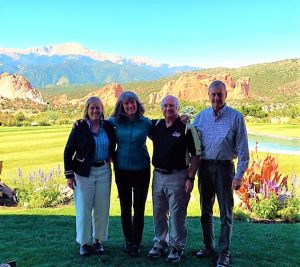 As NKDO Mentor Rod Jacobsen shares, the prompt to research living kidney donation can come from any number of sources. As a teacher, when Rod read a student’s research notes, he was prompted to learn more. Each donor has their own “why,” and Rod’s story reflects that it’s never too late to consider this life-saving option.

At 5:00 AM that April morning, my wife expressed her best wishes, kissed me goodbye, and left me at the hospital entrance, as COVID protocols prevented her from staying with me. After almost two years of working through an unusual but gratifying process, my surgery date had arrived.

The hospital hallways seemed strangely deserted as the anesthesiologist wheeled my gurney through the dark, quiet hallways and into the elevator. He had injected me with a sedative he called “happy juice,” and it worked. Quickly. As we entered the very quiet and impeccably clean OR, I’m not sure what I expected, but as I was connected to the IV I felt a sense of positive anticipation. I was about to donate one of my kidneys.
______________________

Throughout my teaching career I had felt that my students taught me more than I taught them. One spring a few years earlier, when reading through the research notes of one of my students whose senior project focused on living kidney donation, I felt a profound embarrassment at the extent of my ignorance about the topic. The more I read about the prevalence of renal disease, the discomfort of dialysis, and the length of the transplant waiting list, the more surprised I was by the gravity of this problem: 15% of American adults–37 million people, according to the CDC–suffer from chronic kidney disease. And almost 100,000 are waiting for a transplant. I soon became interested in the concept of living donor–as opposed to deceased donor–kidney transplants, which were becoming more common. Because I lived about 80 miles north of Los Angeles at that time, I investigated the UCLA transplant program, submitted the initial survey, and waited for a response. Because I didn’t personally know anyone who needed a kidney, I would potentially be a “non-directed” donor: my kidney would go to someone on the waiting list who was the best possible match. When I approached my wife and kids about the idea, they were a little concerned but gave me their blessing.

As a 69-year-old man with some minor health issues, I was doubtful that I would be considered a viable candidate. The transplant coordinator at UCLA, however, told me that these conditions would not necessarily prevent my donation, so I went ahead with the initial blood tests, and the results showed promise, although I needed to have a hip replacement before I could proceed to the next steps. Several months later the process entered a more serious stage, with interviews conducted online (COVID still being a factor) with a social worker, a psychologist, and an Independent Living Donor Advocate. I enjoyed these interactions because they gave me a chance to express my motivations to become a donor in ways I had not articulated to anyone else. These folks must have thought I wasn’t particularly naive or crazy because they recommended that I be permitted to take further medical steps to determine my viability. Perhaps the fact that my journey had started with reading the research of a young student had struck a chord with them.

Traveling to Los Angeles for the battery of further blood tests, an EKG, and several scans meant that I was entering a more serious stage in the process. Nothing of concern was discovered at that point, and a few days later, one of my favorite moments occurred. When having an online consultation with the nephrologist, she looked at my urine test results and proclaimed, “Your urine is beautiful.” I haven’t often been flattered in quite the same way…

A few weeks later, after a stress test proved that my heart was strong, my coordinator presented my case to the transplant team, who pronounced me a viable donor candidate. Suddenly this journey seemed to have a defined end point–and became very real. This meant that work would begin in earnest to match me with a recipient with similar blood markers who could benefit from my kidney. Some weeks later, they found this match, and a date was set for the transplant. I now dedicated myself even more seriously to my health. I adopted better eating habits and worked out virtually with a trainer I knew, so in addition to the peace of mind that came from a thorough series of tests and scans, I felt that going into surgery I was in the best condition of my adult life.
_______________________

My laparoscopic surgery was “by the book,” which meant that I stayed only one night in the hospital. After a month or so of taking things easy, my strength returned and I soon felt normal–aside from the knowledge that my kidney had been transported halfway across the country and had been successfully transplanted into a person just a year younger than I. Even better, I later learned that his good friend, who had offered his kidney but was not a match, donated to another person who was–and all four of us recovered perfectly.

Although I did not expect that I would ever meet my recipient, through a short and simple “Get Well Soon” email relayed by my coordinator (following the protocols for this sort of communication) I learned his identity, and after further exchanges we shared stories of our lives and families and expressed the hope that we might someday meet.

Last month we did. What a heartfelt, but in many ways what a natural reunion. I was so grateful to hear his personal life story, which is a fascinating, admirable one, and our wives entered into an easy dialogue as well. It was not at all strange to be in the company of a man who had returned to good health with the help of my “redundant organ.” In fact, it was an occasion for mutual gratitude. Yes, my kidney gave him a chance at a healthy, longer life, but the opportunity to contribute to his and his family’s happiness was actually a gift in its own right.

And speaking of gifts, whenever I think of my donation I feel true gratitude to have learned so much from the dedicated research of my student. That knowledge set me on a course that has happily altered the lives of a deserving recipient and his family. And as a volunteer mentor to potential donors, I have the opportunity to help those who have similar instincts to give “the gift of life.” My own life is richer as a result.